Voices from My Heart

It was 1967, I was three years old and my parents rolled me into the biggest room I had ever seen with kids in wheelchairs from the ages of 3-12. My eyes were drawn immediately to the blackboard, the long table slightly to the right, the play area and a yellow piano. As I took in the scene with my keen eyes, I saw a young girl. She was so pale and fragile and not much larger than me even though she was nine years older. Elizabeth, unlike me, who was very loquacious could not speak or feed herself. She had a smile brighter than sunshine, and she beamed whenever she saw me. A year later, I met Bruce who had eyes the color of a blue jay and a great Tarzan yell, so I was deeply in love for a four year old. Forty years later, I carry these two in my heart; they taught me so much about grace in the face of terrible pain and suffering. At seven years old, they gave me the courage to leave them so I could help break down barriers for us and other handicapped children. Who would speak to her and bring that wonderful smile to her after I left?  I saw Bruce one last time; the light of life was absent from his eyes. Later, I learned that Bruce had gone home to be with God and Elizabeth’s Dad had placed her in a nursing home.

We went on a grand field trip to Camp Pendleton because President Nixon, who was President of the U.S. from 1968 – 74, was appearing there. We also took trips to the San Diego Zoo and Sea World. My parents often went along as helpers because all twelve of us had assistive devices: crutches, walkers, wheelchairs and/or leg braces. This meant that it could be quite challenging to keep us all together as a group since we all traveled at different paces. For the most part, these excursions were fun adventures, but these trips were also personal lessons; my first lessons that showed me people could be extremely cruel, especially toward my dear friend Elizabeth. “Look at that stupid retard!’’ This happened many times to her and anger seethed through me each time, but I didn’t know how to cope with it. Tears were streaming down her cheeks, but the cerebral palsy had robbed her of the ability to voice her agonies. I made it a point to let her know she was a beautiful, smart person; they were the dumb ones! It was around this time that I noticed that Bruce was growing weaker. Mom explained that he had Muscular Dystrophy; he was dying and that meant I would not see him again once he died. It was a difficult concept for me as I had thought that only old people died. Little did I know or comprehend how much the winds of change were swirling in my life and in society as a whole. First grade saw me mainstreamed two hours a day into a regular classroom.

I was part of a trial group selected as an experiment to see if we could succeed in class with able-bodied or non-disabled children, and if we would be accepted by them. Our success, in part, led to the inclusion laws a few years later that allowed children the least restrictive education possible. Toward the end of first grade, my parents were called to a meeting. The experiment would be expanded to see if I could handle a full day in my neighborhood elementary school. I would soon be leaving my precious friends. How would I say good-bye to Bruce and Elizabeth? I was filled with sorrow. Mom said that my new classmates could be mean to me, and my mind flashed back to Elizabeth and the heartaches that she suffered on our field trips. I would no longer have my empathetic teacher to act as a buffer from the cruelty that I may encounter. Would I also be teased and bullied?

A mixture of dread, sadness and anticipation filled me on that first day in my new school. As I rolled into the front of my second grade class, I began to introduce myself, explained about cerebral palsy etc. I was so nervous that I could not recall what I had said even a few minutes afterwards. It amazes me now that I do not recall my years at San Luis Ray nearly as easily as I call to mind my time at California Avenue School. A piece of my heart stayed behind there with Bruce, Elizabeth and the others. Part of me wanted to return because I knew that I was accepted there, and I missed my dear friends.

It turned out that it was not my academic performance or my classmates who tried to railroad my mainstream experience, it was the school administrators. They hired aides for me that they knew would not last long; Mrs. Brand was pregnant, Mrs. Stover was elderly… Mom was my aide until she caught the flu and I was forced to stay home. Flu or not, the school district had greatly underestimated a mother’s love when her child was being denied a quality education. She had college dreams for me, after all. Mrs. Deibert entered my life a few days later, and she has never been absent from it. We have had a great many good times together all the way up through my high school graduation and beyond. At this moment, I type away doing my best to fulfill a mother’s wish, dreamed so long ago. This dream has rekindled in me as well; the fire burns deep in my heart to get my degree.

So much has happened since I wrote my story five years ago that I thought another chapter was fitting.  Mom’s long suffering ended on May 21st, 2012. The nursing home said she passed away at 7AM, but I awoke at 5:15 AM as she told me goodbye. It turns out that I was not alone; she visited all those she was closest to as she slipped from this life to go to her eternal mansion. I know she thought of my Dad often since his death only two years before her own passing. It was as though the long, bitter years never occurred between them. I strongly believe that they are together once again in love and peace.

I know that they watched me walk/stroll in the arena with the other more than 500 graduates on June 18th, 2016. I am positive that their cheers joined Kristie’s’ from far above Seattle to wish me well and express their pride in a degree well earned. I sit here tonight, school done, reflecting on one of my favorite poems, The Road Not Taken by Robert Frost. What lies ahead for me?

And sorry I could not travel both

And be one traveler, long I stood

And looked down one as far as I could

To where it bent in the undergrowth;

Then took the other, as just as fair,

And having perhaps the better claim

Because it was grassy and wanted wear,

Though as for that the passing there

Had worn them really about the same,

And both that morning equally lay

In leaves no step had trodden black.

Oh, I marked the first for another day!

Yet knowing how way leads on to way

I doubted if I should ever come back.

I shall be telling this with a sigh

Two roads diverged in a wood, and I,

I took the one less traveled by,

And that has made all the difference.

Which road less traveled should I go? What seemed so clear a short time ago is now filled with questions as I end another chapter. Perhaps, these voices from my past will guide my path. But, do not tarry because I am anxious to get going doing the work that my God has for me. I ask for the strength and the courage to be up to the challenge. Am I supposed to be happy wherever I am placed, or do You have the ideal place in mind? 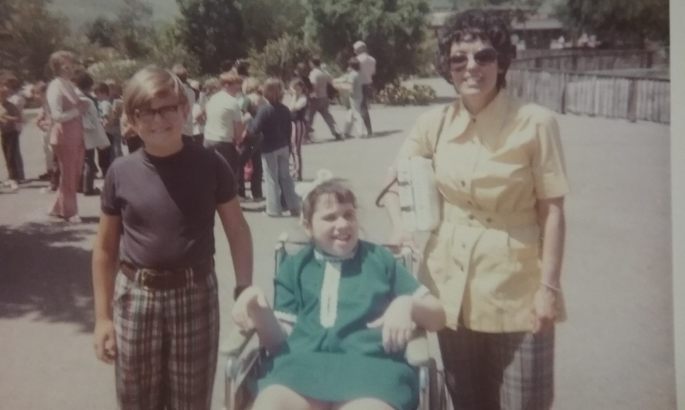 Lukas Maxwell
A Crack in the Pavement

Stories to Inspire, Encourage, and Give Hope

Wandering through this World one word at a time

NOT JUST A PHOTO-BLOGGING SITE!!!!

About fantastical places and other stuff

...Contemplations in the Enfleshed God...

The greatest WordPress.com site in all the land!

my humanity in written form

to him who was, and is, and is to come

"Following The Path To Freedom"

From soul to soul

The Secret Letters to Timbo

Things that I want to tell her....

"Speak up for those who cannot speak for themselves, for the rights of all who are destitute. Speak up and judge fairly; defend the rights of the poor and needy." (Proverbs 31:8-9)

Lukas Maxwell
A Crack in the Pavement

Stories to Inspire, Encourage, and Give Hope

Wandering through this World one word at a time

NOT JUST A PHOTO-BLOGGING SITE!!!!

About fantastical places and other stuff

...Contemplations in the Enfleshed God...

The greatest WordPress.com site in all the land!

my humanity in written form

to him who was, and is, and is to come

"Following The Path To Freedom"

From soul to soul

The Secret Letters to Timbo

Things that I want to tell her....

"Speak up for those who cannot speak for themselves, for the rights of all who are destitute. Speak up and judge fairly; defend the rights of the poor and needy." (Proverbs 31:8-9)